I am about the farthest thing you can get from a poetry fan, but I am a life-long learner and have a master's degree in literacy under my belt, so that implores me to branch out every now and then and embrace genres that I usually don't entertain. Hence, a post on Robert Frost. Maybe it is the idea of a frosty morning here in Virginia that sparked my interest this morning, who knows...If nothing else, I hope you learn a little something just as I did!
About Robert Frost: 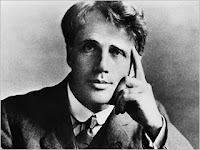 Robert Frost was born in San Francisco on March 26, 1874. He moved to New England at the age of eleven and became interested in reading and writing poetry during his high school years in Lawrence, Massachusetts. He was enrolled at Dartmouth College in 1892, and later at Harvard, though he never earned a formal degree.

Frost drifted through a string of occupations after leaving school, working as a teacher, cobbler, and editor of the Lawrence Sentinel. His first professional poem, "My Butterfly," was published on November 8, 1894, in the New York newspaper The Independent.

In 1895, Frost married Elinor Miriam White, who became a major inspiration in his poetry until her death in 1938. The couple moved to England in 1912, after their New Hampshire farm failed, and it was abroad that Frost met and was influenced by such contemporary British poets as Edward Thomas, Rupert Brooke, and Robert Graves. While in England, Frost also established a friendship with the poet Ezra Pound, who helped to promote and publish his work.

By the time Frost returned to the United States in 1915, he had published two full-length collections, A Boy's Will and North of Boston, and his reputation was established. By the nineteen-twenties, he w 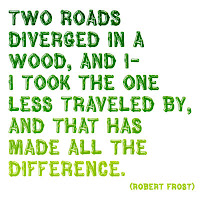 as the most celebrated poet in America, and with each new book—including New Hampshire (1923), A Further Range (1936), Steeple Bush (1947), and In the Clearing (1962)—his fame and honors (including four Pulitzer Prizes) increased.

Though his work is principally associated with the life and landscape of New England, and though he was a poet of traditional verse forms and metrics who remained steadfastly aloof from the poetic movements and fashions of his time, Frost is anything but a merely regional or minor poet. The author of searching and often dark meditations on universal themes, he is a quintessentially modern poet in his adherence to language as it is actually spoken, in the psychological complexity of his portraits, and in the degree to which his work is infused with layers of ambiguity and irony.

In a 1970 review of The Poetry of Robert Frost, the poet Daniel Hoffman describes Frost's early work as "the Puritan ethic turned astonishingly lyrical and enabled to say out loud the sources of its own delight in the world," and comments on Frost's career as The American Bard: "He became a national celebrity, our nearly official Poet Laureate, and a great performer in the tradition of that earlier master of the literary vernacular, Mark Twain." 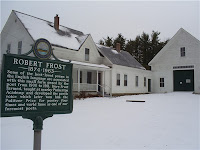 About Frost, President John F. Kennedy said, "He has bequeathed his nation a body of imperishable verse from which Americans will forever gain joy and understanding."

Robert Frost lived and taught for many years in Massachusetts and Vermont, and died in Boston on January 29, 1963.

Some of Frost's Poems (this list is dreadfully short compared to the real number he wrote, consider this a sampling):

And now a little of Frost's work...
"Into My Own" by Robert Frost

One of my wishes is that those dark trees,
So old and firm they scarcely show the breeze,
Were not, as 'twere, the merest mask of gloom,
But stretched away unto the edge of doom.
I should not be withheld but that some day
Into their vastness I should steal away,
Fearless of ever finding open land,
Or highway where the slow wheel pours the sand.
I do not see why I should e'er turn back,
Or those should not set forth upon my track
To overtake me, who should miss me here
And long to know if still I held them dear.
They would not find me changed from him they knew--
Only more sure of all I thought was true.

"In a Disused Graveyard" by Robert Frost

The living come with grassy tread
To read the gravestones on the hill;
The graveyard draws the living still,
But never anymore the dead.
The verses in it say and say:
"The ones who living come today
To read the stones and go away
Tomorrow dead will come to stay."
So sure of death the marbles rhyme,
Yet can't help marking all the time
How no one dead will seem to come.
What is it men are shrinking from?
It would be easy to be clever
And tell the stones:
Men hate to die
And have stopped dying now forever.
I think they would believe the lie.