In the Middle of Almost and Other Stories by S.B. Lerner: Review & Blog Tour

I am delighted to be able to share S.B. Lerner and her work with you today - her book, In The Middle of Almost and Other Stories is touring with Pump Up Your Book: Virtual Book Publicity Tours and my thanks go out to Cheryl or allowing me a spot on the tour!

An engrossing collection of funny, poignant and bittersweet stories about busy young women who find men in all the wrong places (the garage attendant across the street, the stay-at-home dad in the playground, the younger man at the diner counter, the blind date) and discover something about themselves in the process.

These short stories and memoir were previously published in literary magazines and newspapers. 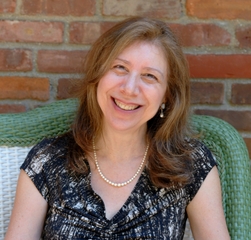 S.B. Lerner worked as an attorney in Manhattan for many years, and in the evenings she wrote and published short stories. They are now available as a collection, called In the Middle of Almost and Other Stories.

After getting married and becoming a mom, she was struck with the importance of knowing family history, so she researched and wrote the story of her father’s fascinating life. It was through learning about his early passion for a Zionist youth group in Poland that she became interested in the subject of her first novel, A Suitable Husband, which is set in prewar Poland.

S. B. loves to read historical fiction and novels set in other times and places, as well as to travel and meet people. Travel time is limited, lately, but she teaches an ESOL class and learns about other cultures through her diverse group of students. When not teaching, doing ‘mom’ things or playing with the puppy, she is at her desk working on another novel set on a college campus in New York.

You can visit S.B. Lerner’s website at www.sblerner.com, and read her blog ‘Novel Thoughts” through a link on the website. You can find Susan’s book on Goodreads at http://www.goodreads.com/book/show/12708823-in-the-middle-of-almost-and-other-stories

Excerpt From the Book:

Jessica sat on a ledge that enclosed a patch of grass in front of her white, brick apartment building. It was too hot to stay inside her summer-sublet studio apartment; even her light linen dress was soggy from the humid air. Passing cars honked and fragments of conversation wafted by, lingering in the air along with the aroma of Chinese food carried by delivery boys on bicycles. She glanced up, but tall buildings cut the evening sky into ribbons. It felt as though she was in a giant maze.

She let out a sigh. She was living in Manhattan to be close to her job, not for the nightlife. Sometimes other students who worked as summer associates at the law firm asked her to join them as they club crawled downtown. But it was a strain to be heard over the music and she didn’t enjoy drinking anyway. She worked long, tiring hours, and preferred to sit on the ledge, smoking a cigarette to wind down.

Her job had followed on the heels of her first grueling year of law school and the work required intense concentration. It seemed to her as though her whole future lay in the balance with every memo she wrote, every passing conversation with a partner at the firm. An image of the short, overweight, balding attorney she reported to took form in her mind and her throat tightened at the thought of him. His head jutted forward on his neck as he scurried around the office on seemingly important missions, like Alice’s rabbit, always about to be late. She treated him with ostensible respect but he seemed faintly ridiculous to her, and in the privacy of the moment she allowed herself to finally laugh aloud, almost choking on the smoke in her lungs.

It was then she realized that the uniformed attendant from the garage across the street was watching her with interest, as though he wanted to share the joke. Or perhaps he was simply curious about why she was sitting outside alone. It crossed her mind that any distraction might be a relief to him from the monotony of parking cars.

“Keeping cool out here?” he said, pausing before crossing back to the garage.

“Just barely.” She spoke with no inflection and her eyes looked past him. Her instinct was to be wary of friendliness from a stranger in the big city.

“Yeah, I guess you need to go by the river for some breezes,” he said, as he ambled back across the street.

She’d noticed he had a pleasant voice, through the haze of her caution. Its timbre reminded her of a tenor sax, mellow and soothing. She’d been vaguely aware of the him; he had passed her several times, taking cars to an overflow lot next to her building and then returning to the main lot across the street. But he had merely been part of the scenery. Suddenly he was a presence to reckon with.  Feeling exposed, she went inside a few minutes later, but was annoyed at depriving herself of the city’s breezes, however polluted, after a long day at work.

So the next night she was out on the ledge again, engrossed in a magazine which lay sprawled across her lap. A vaguely familiar voice addressed her and she felt a sensation of peacefulness.

I really enjoyed this collection of short stories...I felt very connected to the women portrayed here even though we have many differences.

How Lerner connects the women throughout the book (even though this is a collection of short stories where the women all are dealing with different circumstances) is really key here.  Usually short stories feel disjointed and disconnected which is something I shy away from generally, but that is not the case with this one.

I think another strength of this work is Lerner's descriptions of the setting.  I have never been to New York City, or any other major urban area for that matter but I really did feel like I was there envisioning the lifestyle that these women lead.  One thing that really stunned me is how truly isolated these characters were despite being surrounded by thousands of people - very telling.  I had read an article lately about how people in urban areas feel more alone than others who are geographically isolated and that really connected with this book for me.

This is the kind of book where you really find yourself rooting for the characters - Lerner presents them so well that they jump right off the page and connect with you emotionally and you can't help but want everything to turn out well for them.

I highly recommend this book, it really is worth your time and a great quick read.  S.B. Lerner has now become a new favorite of mine!